The bluespotted ribbontail ray (Taeniura lymma) is a species of stingray in the family Dasyatidae. Found from the intertidal zone to a depth of 30 m (100 ft), this species is common throughout the tropical Indian and western Pacific Oceans in nearshore, coral reef-associated habitats. It is a fairly small ray, not exceeding 35 cm (14 in) in width, with a mostly smooth, oval pectoral fin disc, large protruding eyes, and a relatively short and thick tail with a deep fin fold underneath. It can be easily identified by its striking color pattern of many electric blue spots on a yellowish background, with a pair of blue stripes on the tail...At night, small groups of bluespotted ribbontail rays follow the rising tide onto sandy flats to root for small benthic invertebrates and bony fishes in the sediment. When the tide recedes, the rays separate and withdraw to shelters on the reef. Reproduction is aplacental viviparous, with females giving birth to litters of up to seven young. This ray is capable of injuring humans with its venomous tail spines, though it prefers to flee if threatened. Because of its beauty and size, the bluespotted ribbontail ray is popular with private aquarists despite being poorly suited to captivity. The International Union for Conservation of Nature (IUCN) has listed this species as Near Threatened, as it faces widespread habitat degradation and intensive fishing pressure throughout its range. Photographed in the Red Sea Israel 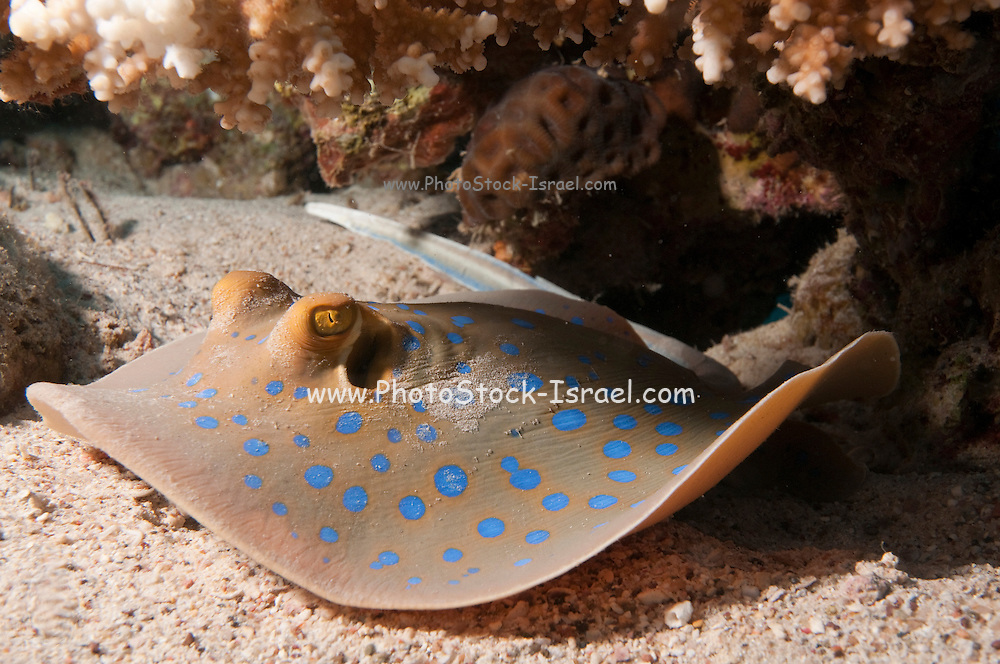