Purgatorio ("Purgatory") is the second part of Dante's Divine Comedy, following the Inferno, and preceding the Paradiso. The poem was written in the early 14th century. It is an allegory telling of the climb of Dante up the Mount of Purgatory, guided by the Roman poet Virgil, except for the last four cantos at which point Beatrice takes over as Dante's guide. Purgatory in the poem is depicted as a mountain in the Southern Hemisphere, consisting of a bottom section (Ante-Purgatory), seven levels of suffering and spiritual growth (associated with the seven deadly sins), and finally the Earthly Paradise at the top. Allegorically, the Purgatorio represents the penitent Christian life. In describing the climb Dante discusses the nature of sin, examples of vice and virtue, as well as moral issues in politics and in the Church. The poem outlines a theory that all sins arise from love – either perverted love directed towards others' harm, or deficient love, or the disordered or excessive love of good things. From the Divine Comedy by 14th century Italian poet Dante Alighieri. 1860 artwork, by French artist Gustave Dore and engraved by Stephane Pannemaker, (1868), Cary's English translation of the work. Dante wrote his epic poem 'Divina Commedia' (The Divine Comedy) between 1308 and his death in 1321. Consisting of 14,233 lines, and divided into three parts (Inferno, Purgatorio, and Paradiso), it is considered the greatest literary work in the Italian language and a world masterpiece. It is a comprehensive survey of medieval theology, literature and thought. The new non-dialect poetic language Dante created became the basis of modern Italian. 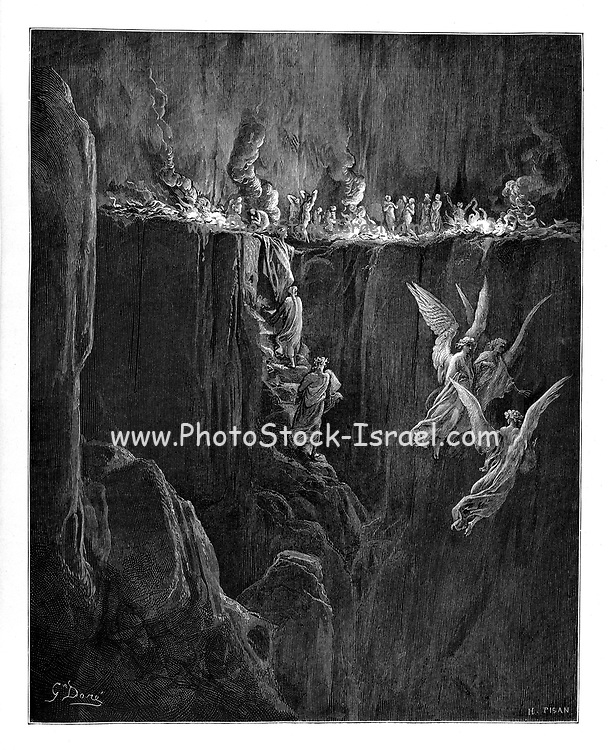