Destruction of the Floating Batteries at Gibraltar,

Destruction of the Floating Batteries at Gibraltar, 14 September 1782 A scene during the Spanish assault on the British stronghold of Gibraltar. During the spring of 1782, with 'the Rock' under close siege, Spain had been adapting ten old warships into powerful special floating batteries, in preparation for their assault. Under the direction of a French engineer, Marchand d'Aroon, they were reinforced and had water tanks with elaborate piping added, so that water could be turned on any part where red-hot shot had embedded itself. Their attack from the sea came on 13 September in perhaps the most furious and sustained gun duel ever experienced. None the less, the flotilla was repulsed by the Governor and Commander-in-Chief at Gibraltar, General Sir George Augustus Eliott, later Lord Heathfield, and during the night it was destroyed by gunboats led by Captain Roger Curtis, of the Navy. Among the weapons used in the defence were guns with carriages specially adapted to allow them to fire downward from the Rock. The painting shows an evening scene with the floating batteries on fire on the left. In the central distance one can be seen blowing up. In the left-centre foreground one of the Spanish gun vessels is sinking, in starboard-quarter view, with a boat in the foreground going to her assistance. The British boat in the extreme right foreground is shown rescuing Spanish sailors from a floating spar and sail. Gibraltar can be seen in the right background, with the batteries firing towards the fireships. by Thomas Whitcombe, 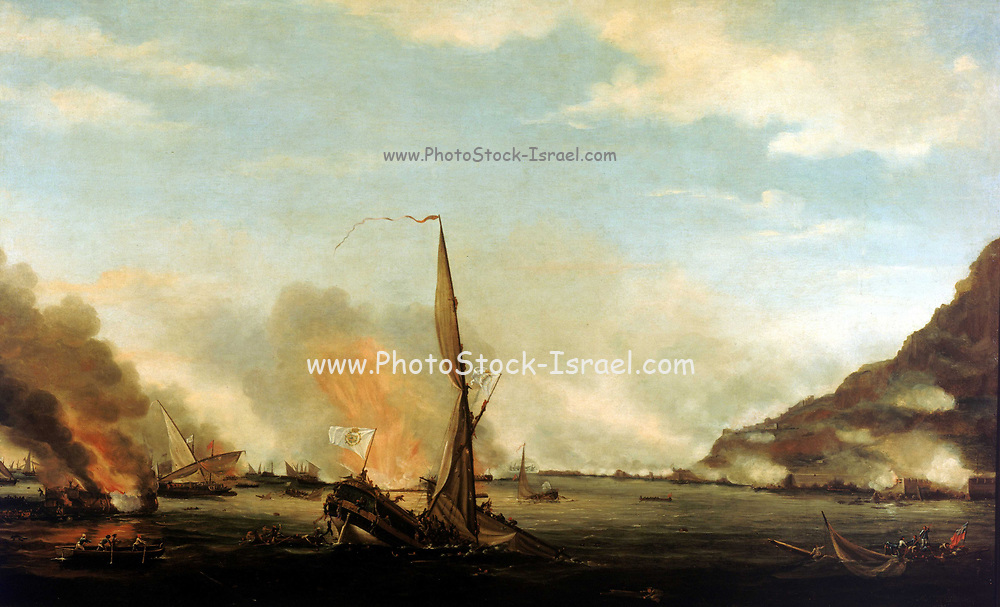