Word Map Monialium Ebstorfensium mappa mundi Published in 1898 based on 13th century map by Gervase of Ebstorf Circular colorful pictorial map of the world, 101 diameter, on sheet 118x106, dissected into 20 sections 29x21, mounted on linen. The map, printed in Stuttgart, is a reproduction of the famous Ebstorf map which was destroyed in 1943. This large, circular "mappa mundi," by Gervase of Ebstorf is one of the most famous 13th Century historic maps of the world. With common medieval manuscript symbols and the medieval forms of place names, it reflects the contemporary religious ideas of the medieval map maker and represents cosmography and not cartography, which teaches the constitution of the whole order of nature, or the figure, disposition, and relation of all its parts. It visually portrays the Greek concept of the earth as flat, circular, popularized by the addition of Christian dogma. The original map, discovered in the Benedictine convent of Ebstorf, Germany, in 1830, dates from around the thirteenth century. Various dates have been given by authorities ranging from 1270 to 1350. Map showing the world is centered on Jerusalem, depicted with gold, eight-sided medieval wall, and the Tower of Babel, Bethlehem, Sodom and Gomorrah, and Mt. Sinai. Christ’s head represented in the East, at the top of the map, the direction of Paradise. His hands mark the northern and southern limits of the known world, and his feet are at Gibraltar where the Mediterranean meets the Atlantic. Europe is in the bottom left, Africa in the bottom right, and Asia at the upper half. In the East, near Christ’s head is located the Garden of Eden surrounded by mountains, the two figures bent to gather silk. Alexander the Great is consulting the Oracle of the Sun and the Moon. The map surrounded by water, depicts significant landmarks highlighted by gold, towns are shown by towers, wildlife, rivers, mountains shown pictorially and points of interest for the curious pilgrim. Also shown a 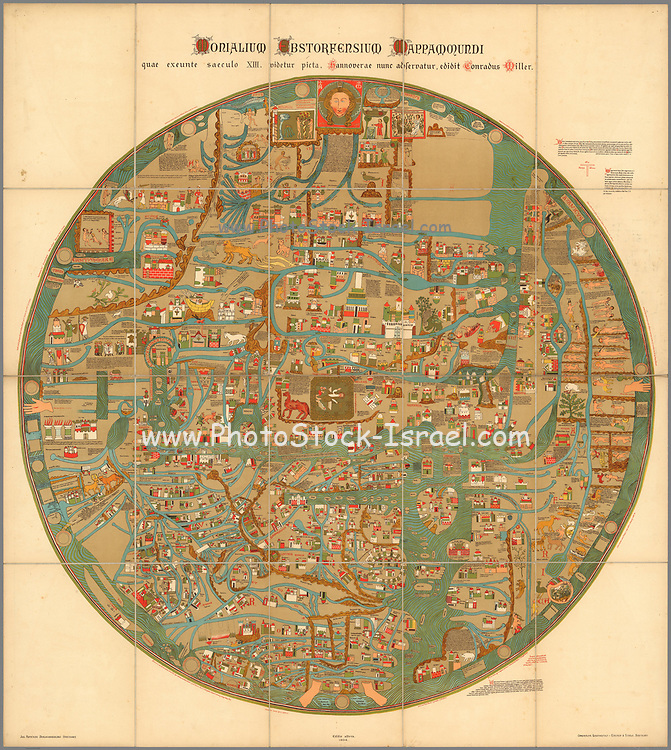